Elspeth Edwards had stopped answering the door if her friends tried to drop in for a visit, even though she would have loved their company. Why? Because she was too ashamed to invite them into her cluttered and untidy one bedroom appartment.

Now, the 76 year old has thrown a party for her friends and plays the hostess for any friend who drops by, after having her home decluttered and organised with the help of Sarah Macnaught from Rightsize, a professional clutter clearer.

Elspeth raised her two daughters on her own while living in a three bedroom apartment. She worked as a nursery teacher but then started an ironing service and ran a successful business for 16 years until she retired at 60. After her girls grew up and left the nest, Elspeth downsized to a one bedroom apartment and, obviously, her belongings easily filled the space so over time Elspeth started having difficulties putting things away and her home became constantly untidy.

“I like knitting and sewing so I had quite a collection of fabrics and yarn. But every cupboard was absolutely full with stuff. And clothes, lots and lots of clothes, some were too small for me but I thought ‘Oh, maybe I’ll get back into them one day,’ you know, that kind of thing. There were boxes and bags in the cupboards and some underneath some of the tables.”

And the situation was depriving Elspeth of nourishment for the soul. “The flat was always cluttered and untidy. I do like seeing people and chatting to people but if anybody came round spontaneously and knocked on the door, often I wouldn‘t answer because I was ashamed to let them in, to see what the place was like. So I was denying myself company, really.”

All the clutter also made housework such as dusting and hoovering more difficult. “I was thinking about getting a cleaner but I thought ‘I can’t get a cleaner in because it’s all too messy and I’m tidying up too much stuff.’ So I thought, why don’t I try and declutter first? I have bought several books about decluttering but never could do it on my own so just had the books adding to the load of stuff. So I looked online and found Rightsize and emailed Sarah.”

Sarah replied and the two women had a long chat over the phone, where Elspeth discovered that Sarah lived quite close by so they decided Sarah would pop round and assess the task ahead. “She estimated how much time we would need and she was totally correct about that, we had six sessions of four hours each to finish the task.”

But how did Elspeth feel about allowing a stranger into her house and go through her things? “I was just excited and having talked to Sarah beforehand I knew she wasn’t going to be somebody who would try and get rid of everything. Some of my friends and my children thought she might come in and clear the whole place but it’s not like that at all. The good thing about Sarah is she doesn’t make you get rid of anything, she just goes through it with you and helps you reach a decision. She never said ‘Oh, you should get rid of that,’ or that kind of thing, and I knew my own mind when it came to it. I knew what I wanted to get rid of and what I wanted to keep.”

Together, Elspeth and Sarah went through everything in the flat, room by room. “We started off with the clothes and we went through all of them. And she also got rid of all my hangers, I had a lot of all sorts of hangers and she provided me with some of those lovely velvet ones of which nothing falls off. The kitchen was of course hard work, all cupboards filled with pots and pans. A lot of them were thrown out because I wasn’t using all of them and also, Sarah organised things so that there was a place for everything and I’d know where everything was. I don’t have a lot of cupboard space in the kitchen so they were overflowing or things falling out and breaking and it just wasn‘t easy working in it before.” Now, Elspeth says, every item in the kitchen has its own place and so it’s easy both to find things and put them away after use. 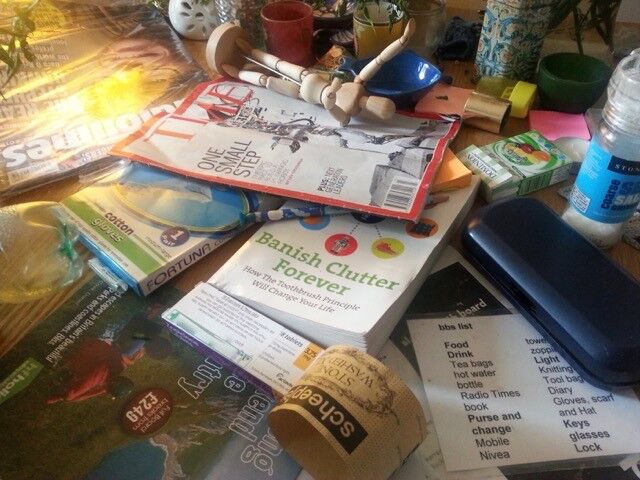 But what Elspeth is also happy about is that the things that she threw out didn‘t all go to waste. “Sarah divided it carefully up into recycling, charity and rubbish. And she took it all away for me because I don’t have a car so that was extra special for me. She also has contact with different charities so she knows which charity to take what to. For instance, I had a lot of yarn that I didn’t need or want and she knew a charity that specifically wanted yarn for people who needed to knit. She knows her stuff and she knows where to recycle things. I like to know that my things are either going somewhere useful or to the appropriate waste.”

Elspeth admits that even though she was excited about having Sarah come round to go through her things with her, she sometimes felt a little apprehensive about it. “There were times she came across things that I’d rather she didn’t see. You know, certain kind of self-help books I had hidden in away in corners and forgotten about. However she didn’t make me feel embarrassed at all. Instead of saying ‘Oh my goodness what have you got this for,’ Sarah simply said, ‘Oh, well if you don’t want it I know somebody who would love that book,’” says Elspeth and laughs heartily.

“I hope all clutter clearers are as non-judgemental as Sarah is, because I never once got the feeling that she was thinking ‘Oh my goodness, why is she keeping that old crap?’ Never. And she just wouldn‘t ever make you feel forced to get rid of anything. So that was a huge relief and I think it would be a huge relief for most people. Maybe one of the reasons why people don’t get a clutter clearer in is because they think they will be judged but that didn’t happen. Sarah is very lovely and very good at her job.”

And how did it feel afterwards, when all that clutter had been cleared out and things reorganised and tidied up? “I felt euphoric! And I had a party for some friends, which I probably wouldn‘t have done otherwise because I would just have thought ‘Oh no, I can’t have them round, the place is has too much stuff in it,’ so it was lovely; I really had a lovely time. They all thought it was wonderful, they were very impressed. And my daughters are really relieved that I didn’t throw anything important away.”

Now, Elspeth doesn’t hesitate to invite her friends in when they come for a surprise visit. “I do have more company round than before and people dropping in which is nice, because it was difficult before. I tell other people about Sarah because I know people who could do with some help decluttering. It does seem overwhelming, certainly if you’re on your own, so I recommend her service whole-heartedly.”

PLEASE CALL FOR A FREE CONSULTATION

“Sarah is best described as unique and highly effective. This is because Sarah understands the need for all planning to be integrated in a coherent way. She drives projects in such a way so that deadlines are met.”

“What I loved about Sarah was her facilitation skills in getting me to think methodically and logically through the various decisions I had to make. She was always sensitive to how letting go of some of my things was a very personal choice – but always there as the voice of reason…”

“Sarah has personally managed projects over a number of years with great enthusiasm and patience with minimal involvement from me, saving an enormous amount of time and aggravation. I travel frequently and it has been a relief to have Sarah get things sorted in my absence.”

“Sarah acted as project manager and all round fixer for a major building project at our home. She was highly organised, professional and hands on through all stages of the project from selecting the builder and other tradesmen, to a major decluttering of our home…”